Enns river
For many a century, the river was a major transport route for iron ore from the Erzberg. Because of violent torrents and large reefs, journeys on the river raft were very dangerous. In the 16th century, rafts were replaced by barges that could transport up to 10 tons of load downstream. On their way back, the barges were loaded with food and pulled upstream by horses along special shore paths, the so-called "Treppelwege".

Zwischenbrücken
This small square is located between the Enns and Steyr bridges. The last house on the Enns side is the Löwenapotheke, a pharmacy with a beautiful Baroque facade. Behind a Gothic archway, stairs lead up to the Lamberg palace. The fresco aboce the archway depicts the two Habsburg emperors Friedrich III and his son Maximilian. According to a folk legend, these two knights were the founders of the town of Steyr.

Water Tower
This yellowish tower was built in 1572. The tower supplied the fountains and homes of upper and lower downtown square with water by a tunnel system. The pumping station attracted wide interest as an engineering feat of the time. When the tower started to tip, it was shortened for safety reasons in 1909. 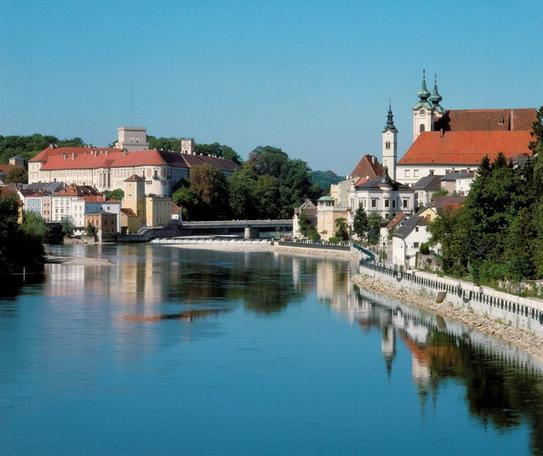